It's Early Yet, But There's Some Historically Productive Scoring in the League Right Now

You might remember I have done a bit of work on the usage-efficiency tradeoff in the past. The "payoff" was a chart that presented evidence of a usage-efficiency "frontier" (having stolen the idea of an efficient frontier from finance, of course):

We're almost at the quarter-point of the 2012-13 season now, so I thought it would be interesting to look at the current leaders, and see where they stand with respect to the frontier. So far, pretty, pretty good. In particular, Kevin Durant, Kobe Bryant, Tyson Chandler (so good he looks to be close to setting a new point along the frontier), and Carmelo Anthony are on or very close to the frontier, itself. Have a look: 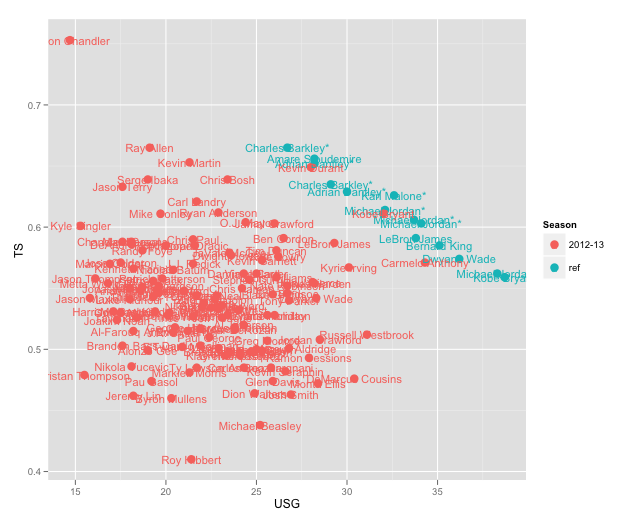 The players in green make up the historical reference for the "frontier". Note that Chandler would be very near the frontier if it was extrapolated out further.

Of course, we should expect some regression to the mean. How much is anyone's guess, so I'll update the results periodically throughout the season.

This entry was posted in Uncategorized. Bookmark the permalink.
Sign in