There’s a revolution taking place in NBA analytics driven by new sources and types of data and an increasingly sophisticated application of statistics. As a blogger, I’m always on the lookout for the “next big thing” in NBA analytics.  Recently, I have had the opportunity to do some statistical consulting for a start-up company in Seattle trying to establish itself as — you guessed it — the next big thing in NBA analytics. The company is , and with a combination of proprietary technology and highly trained data analysts, CAC tracks each player during every play of every game, resulting in countless new and relevant stats — some of which you’ve likely always wanted to see in a box score, and others which would never even dawn on you to track, but make perfect sense, after the fact. Of course, there are a couple of other increasingly well-known companies that supply NBA teams with useful (or potentially useful) data, including STATS, Inc. with their SportsVU player and ball tracking technology, and Synergy Sports Technology, which relies on video tracking of various play types.

Knowing what Synergy currently offers, and having had access to CAC’s database for a few months now, I can state for a fact that CAC is tracking stats that are not available anywhere else today. I think of CAC’s software platform (called “Vantage”) as Synergy on PEDs.  CAC has given me permission to use some of their never-before-released data in this article, which I will use to highlight just one new factor (“shot defense”) that CAC is tracking.  Once you see the data, you will wonder why nobody has done this before (aside from the cost and laborious work involved!). It will also hopefully drive home the message that very soon all 30 teams are going to need these kinds of data just to keep up with the Joneses (or possibly even the Jameses). It’ll simply be the cost of doing business in the NBA.

Shot defense is defined by CAC as the pressure that a defender applies to the shooter. There are 7 possible values:

Only two of those values are currently recorded by the box score or play-by-play data, BLOCK and FOUL. But how many conversations have you had with your buddies about the number of contested shots Kobe Bryant takes compared to, say, a player like Matt Bonner whose job it is to stand in the corner and hit open 3-pt shots? We’ve all had those conversations numerous times, and likewise, NBA decision-makers, scouts, and players know that the shot defense a player faces is a huge factor in his shooting efficiency. Now let’s slice through the data in a few different ways.

I should make it clear that I’m not going to spit out a bunch of numbers in a table and tell you to go read them. I think that one of the critically important aspects of supporting NBA decision-makers is distilling the vast amounts of data in ways that are understandable and actionable for folks that don’t have PhD’s. This is a vision CAC shares, and it often means utilizing new visualization techniques to reduce the dimensions of a problem. The reason I’m prefacing the “data” part of this article with this comment about visualization is that you may find the attached graphics a little intimidating at first. Fear not, they will become second nature once you realize the key points in each one.

The first graphic looks at shot defense on 2-pt shots in matrix or “heat map” form, where the color of each tile represents the efficiency in terms of FG%. White tiles are worse (less efficient) shots and red tiles are better (more efficient) shots. Blocks were not included (0% efficiency by definition). Each row of the matrix represents a play type defined in a similar way to Synergy, except, the observant reader will note the addition of a new play type called “FLASH”, which is when a player receives the ball after cutting sharply toward the perimeter (as opposed to CUT which is defined as moving sharply to the basket). The other play types (TRANS = transition, SPOT-UP, ROLL = screen and roll, POP = screen and pop, OREB = following immediately after an offensive rebound, POST-UP, OFF SCREEN = coming off screen, and ISOLATION) are probably familiar to you, regardless of whether you have used Synergy. 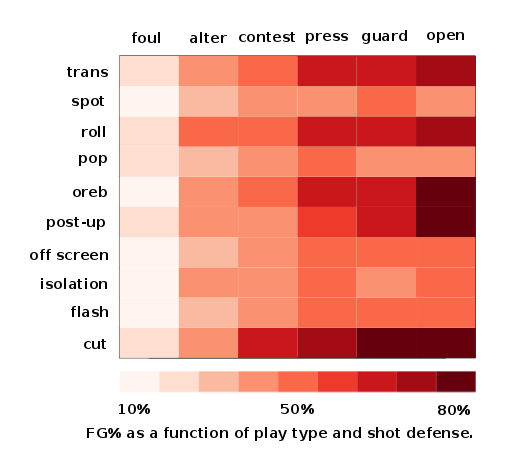 What the data show are, perhaps, striking confirmation of what basketball fans think they already know. As the defender gets closer to the shooter, the shots get less and less efficient. What may surprise you, however, is the difference that just having a hand up can make. Across virtually every play type, having a hand up (CONTEST) vs. not having a hand up (PRESSURE) makes a significant difference.  On POST shots, a pressured shot averages 54.3%, whereas a contested shot is only 42.3%. A contested screen and pop is 37.8% on average, compared to 50.5% when the shot is only pressured. That’s over a 10% difference just from the defender putting a hand up. Another important takeaway from the chart is that on several play types, there isn’t much of a drop-off between pressured and guarded, in terms of shooter efficiency.  In other words, it doesn’t matter if you’re 5 feet away or 2 feet away, if you don’t have your hand up. It’s no wonder Mark Jackson’s favorite line is “Hand down, man down!”

The second graphic slices the shot defense data in a different way, namely, as a function of the 24-second shot clock. Instead of comparing all the different play types, we’ll just focus on two, isolation and spot-up. This graphic “bins” the data, one shot a time, into buckets defined for each shot defense value. The data are slightly jittered so you can see all the shots, because otherwise, they would just lie in a straight vertical line. What this graphic allows you to see is a data “fingerprint”, so-to-speak, for each play type. Shots generated via isolation, not surprisingly, tend to fall most often in the contested and pressured bins. Compare that to spot-up shots where the open and guarded bins have a relatively high density of shots compared to the isolation plays. Again, this should not be surprising, but the value is in being able to quantify the data. One last interesting statistic before we move on to the final graphic. You can see the distribution of shots by shot clock time remaining. I bet you’re wondering if the average shot clock time varies as a function of shot defense. Well, yes, it does actually. It turns out that contested shots on average take place with about 2 fewer seconds on the shot clock than open shots. If we remove transition plays (which skew the distribution), contested shots still occur about 1.3 seconds later in the shot clock on average. 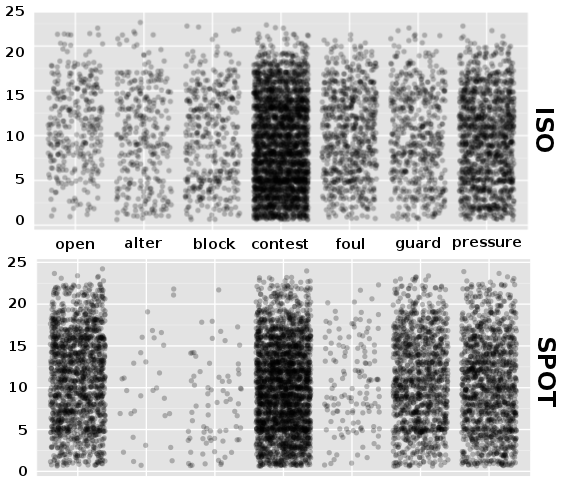 For the final graphic, I drilled down to a specific comparison of shot defense faced by LeBron James and Kobe Bryant as a function of the shot clock. This graphic shows the fraction of total shots facing each type of shot defense with a given amount of time remaining on the shot clock. The main feature and difference between the two stars is that Kobe faces a consistently high level of contested shots throughout the shot clock, whereas LeBron displays the more typical pattern of facing increasingly more difficult shot pressure as the shot clock winds down. I’ll leave it to the reader to debate with his or her friends whether this exposes a flaw or greatness in Kobe’s game. 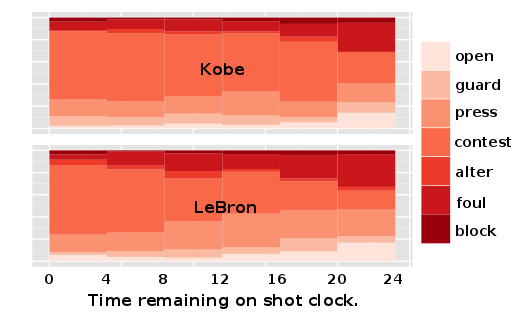 Clearly, I have just scratched the surface of what can be done with these new data. And remember, this is just one new factor that I’ve discussed here. CAC is tracking dozens of other ones that I can’t share right now. The combinations of factors that can be studied and analyzed on every single play are mind-boggling. You know, if I were an up-and-coming basketball player, I might think about taking just enough math in college so that I could understand what guys like me are talking about with all this analytics stuff. Maybe it can give you that extra edge, like shooting another 100 jumpers a day or something. Because I can tell you this, it’s not going away, and it’s only going to get more important over time.

Vantage Basketball currently offers industry-leading data collection and analysis products and services to NBA organizations and media/broadcast companies at . All data presented in this article are used with permission of Vantage Basketball LLC and should not be copied or distributed without its express written consent.

This entry was posted in Uncategorized. Bookmark the permalink.
Sign in

On the third chart, it's interesting to me that likelihood of getting blocked increases as you get very close to having 24 seconds left. I'm guessing that's because most shots taken at that time would be put-backs, which are generally right around the basket and often contested by big men.

Interesting article. Were did you get all of the information from? Anyway thank you for this excellent post!

It's really interesting that this data is being tracked. I'm guessing there's also data on who is defending on each play, it'd be interesting to see(at some point in the future) the impact of things like individual player length on shot pressure and percentages. Anthony Davis being within 3 feet and contesting might impact a shooter more than Steph Curry, and with data, you could get the effect of an additional cm of height/wingspan/standing reach on shooting performance.

On the second graphic, if you bin the data in, say, 1 second intervals, and color-code by FG%, it would be very interesting.